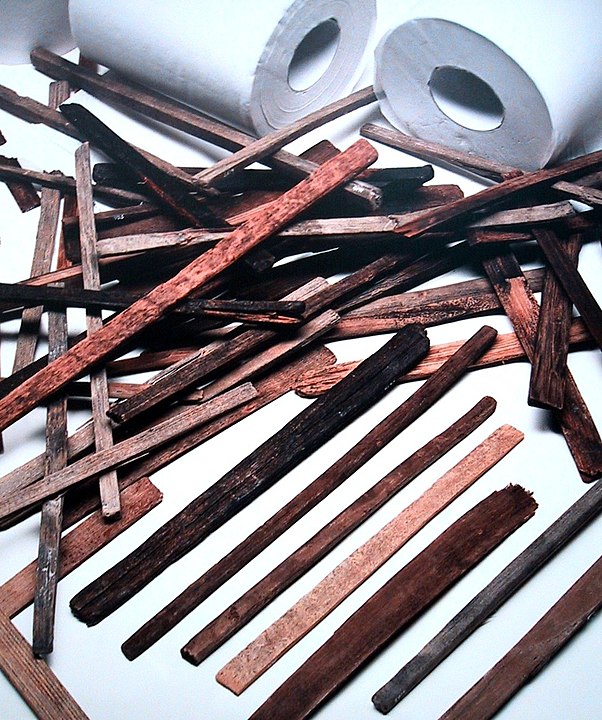 Given the current emergency, I considered writing on past diseases that made a great impact upon a society. I may still do that, but the growing reports of people buying up a single, most essential item has led me to write this post. Toilet paper, it’s history, and what people use and have used instead of it.

People pooped before the invention of paper. In fact, they did so for millennia with little difficulty. The obvious material to use would be leaves, however a bewildering array of items has been used to clean one’s bottom.

Sticks, for one, have been used to scrape away any remnants. These so-called shit sticks could be made from wood or bamboo and were used in India, China, and Japan. They resembled spatulas, though a little longer.

The Greeks would sometimes use pieces of ceramic for the job, while Roman public toilets had a communal sponge on a stick. This tersorium would be washed between uses by plunging the head in a stream of flowing water, or dunking it in either vinegar or salt water, whatever was available.

Ancient Jewish sources meanwhile tell us that it was their custom to use small pebbles, often carried around in special bags, or use dry grass or pieces of ceramic much like the Greeks did.

Another way that is still being used by millions today is using water to clean yourself after doing your business. It is the preferred method in Islamic cultures as well as in India, Sub-Saharan Africa, as well as Southern Europe and France.

I should begin by noting that toilet paper is clearly not the only method in use even today. Yet for many, there’s no other way imaginable to keep one self clean after answering the call to nature.

We don’t know when paper was invented. The historian Fan Hua (398-445 CE) related the tale of the court eunuch Ts’ai Lun presenting the newly invented material to Emperor Hedi in 105 CE. However, we have archaeological evidence of paper from centuries before. Traces of ink on some of the scraps tells us that had been invented by then as well.

We also don’t know when they started to use it for cleaning their behind. There’s a mention of not using paper on which there are quotations or commentaries from the Five Classics or the names of sages by the scholar-official Yan Zhitui in 589 CE. This implies that they would reuse paper for their toilet needs.

Indeed, we find references to such use in Europe as well though there it starts in the 16th century. The printing press helped with the proliferation of reading material. There were pamphlets, almanacs, but also regular stories which could be “dumped” after reading.

The first time we learn of paper specifically produced for the purpose of cleaning one’s bum is the fourteenth century. Early in that century, it was recorded that in Zhejiang province alone ten million packages of a thousand to ten thousand sheets of toilet paper were produced every year.

In 1393, a staggering 720,000 sheets were made for general use for the imperial court in Nanjing. And these were sheets rather than rolls, measuring 60 by 90 centimeters. In the same year, for the imperial family alone, 15,000 sheets of extra soft paper were made which were also perfumed.

The modern use of toilet paper got its advent in the late nineteenth century. There had been a previous attempt by Joseph C. Gayetty, who founded The Gayetty Firm in 1857 in New Jersey and his first factory-made toilet paper was “The Therapeutic Paper”. It was medicated with aloe and sold in boxes of loose, flat sheets much like it had been distributed for centuries in China.

It was not a success, but the Scott Paper Company tried once again in 1890. Here at last was the roll we’re familiar with, though the paper was not perforated into individual sections. Those would come a few years later. However, this paper was rough. Only in 1935 was splinter-free toilet paper developed. This paper was also single layer, double layer wouldn’t be invented until 1942.

What really propelled toilet paper into prominence was the advent of indoor plumbing. The old standbys of almanac pages or newspaper would lead to clogged toilets, toilet paper did not.

So if you find yourself without toilet paper, think twice before using yesterday’s newspaper. Instead, consider getting an ice lolly.